Fionnuala Mottishaw is entering her fourth year of studying painting at Edinburgh College of Art, United Kingdom. After a childhood in which she made her own clothes, painted on walls and had an intensive phase of crochet, Fionnuala is currently making extensive use of the freedom and space that college allows her to have, exploiting her ambitions in regards to her work both physically and conceptually.

Can you describe Chimera no. 4 and Chimera no. 6?:
These are small objects and also light meaning they can be held quite comfortably in the hand (1). Neither is larger than the average Chihuahua. However I would not recommend carrying these around in your bag as they are key artefacts in the Edinburgh Displacement Museum collection, carefully restored and maintained (2). In many ways they are archetypal of the rest of the collection. I would argue this on two points: their method of construction and the aesthetic/origin of the motifs with which they are decorated. Firstly, all the artefacts in this collection have a tendency towards bright colours and highly decorated surfaces. But perhaps more interestingly they all have this inclination towards taking pre-existing images, recombining them and remaking them in cheap materials (3). It should be emphasised that despite these less than valuable materials these are not throw away objects- something made casually to fill some time, the labourious process of construction (particularly worthy of note is the sewn joins- this surely is an unnecessarily time-consuming process) can be seen as testament to the importance placed both on the act of creating these and the resulting object (4). Although we are yet to divine the purpose of these the intensity of their construction has lead us to use the title “cultish object” for the time being. It is felt that this will adequately indicate their “atmosphere” and give some impression of their significance until we can more firmly clarify their original function. The combination of motifs should also be noted as they pose a particular challenge to the museum researcher confronted with these pieces. There appears to be no logical connection, at least that which we can make out, which links the chronological or geographic origins of the motifs, at least when we are working within any recognised frameworks. We can only guess (5) that these were copied from older objects, which had somehow travelled to the Edinburgh area. This process of copying is very important. The object itself will never be an exact copy, partially this is because of the materials but there is also an element of human error, there will always be something, even if it is just the smallest detail which slides. Given that wealth of imagery the imagination is left in awe at the networks of people and ideas necessary to bring them together.
-Fionnuala Mottishaw, Keeper of the Museum Collections

What significance does the work have to you?
The collection of object dubbed “chimeras” (after the monster of ancient Greek mythology) was one of the first I formed under the guise of the Edinburgh Displacement Museum. It was with these artefacts that I really started to develop this idea of creating artefacts of an alternative history and appropriating the museum structure as a way to validate them.

How do you understand the relationship between crafting techniques and the art world?
Craft and “art” are intimately connected and always have been. However, a short time ago, relatively speaking there was a period when it became unacceptable for the art establishment to ally themselves with craft. Craft was trivial, effeminate and domestic. It is still trying to pull itself out from underneath that heap of assumptions and now it makes some people uncomfortable because the snobbish, patriarchal shadow of modernism hangs over us still watching our every move. There may also be an element to which self-proclaimed serious artists fear having their work placed in the same category as a knitted Battenberg. But the boundary between art and knitted battenberg have been crossed and continue to be crossed in such successful ways, that the serious artist is left wondering where exactly did they leave that line of theirs. What craft techniques offer to an art context is another mode of communication. There is an understanding that comes from being able to see how something has been made. To my mind this can help to bridge the gap, which so often emerges between artwork and audience.

Who or what influences you?
In the National Museum of Scotland there is a cabinet showing various toys from the turn of the twentieth century and nestled among the dolls and skipping ropes is a small, slightly battered paper boat. The plaque underneath reads: “Paper Boat made in Ollaberry, Shetland by Mr Magnus Ratter (early 20th century)” I love this sort of thing- our affection and care towards the apparently worthless. And this is the power of the museum- that they can take something as minor as a paper boat and argue that contrary to all expectations it is worth keeping, that it is worth anything at all. I appropriate this in my work- I create a catalogue numbering system and see my work as not being made but instead being unearthed. Unless I am in the process of making an object, I step back and take on the guise of “Keeper of the Museum Collections”.

What’s the best part about being a woman* artist in 2016?
What I find most exciting about our present moment, is the prevalence of people choosing to craft and form feminist communities within this rise of craft. Yes, there are some people monetising on this but to me this doesn’t undermine the sense of solidarity and encouragement that I feel knowing other women share this enthusiasm. It also means more and more women can enjoy the empowerment that comes from choosing to make something yourself.

Artist’s Statement:
I remake artefacts. I carefully isolate them from the context the museum curators have decided upon and reintroduce them to other fragments of history. By performing this task, and then repeating it again and again with still more objects I am creating a visual testament to the wealth of cultural interaction which is all too often ignored in historical accounts. Accounts such as those timelines, which describe a logical chain of events from the ancient Egyptians to the present day, are simplifications and do not actually serve to tell the story of what it is to live through history. We know better: we are doing it everyday. I cannot speak for everyone but I feel so surrounded by constantly occurring events that even with the most careful analysis they will never be entered onto a timeline, there is just to much there. To neaten is necessarily to cut away.
These are grand ambitions, ambitions that I know I cannot fulfil but in my work I admit to that- purely by making them by hand and being explicit in this. The process of sewing and moulding the artefacts is key as it is through this physical interaction between materials that I come to an understanding of what it is that I am doing. It also has the appeal for me of connecting with craft the process of skilfully forming a familiar material is hugely inspiring for me and although I enjoy the freedom of art but the fluency of craft will always be part of my practise. Although there is another point of synergy in this combination of art context and craft skill in that it demands validation for the traditionally feminine world of. I am shameless about my sewn surfaces and often toy-like aesthetic, and their place both within a legacy of fine art and traditional craft practises. 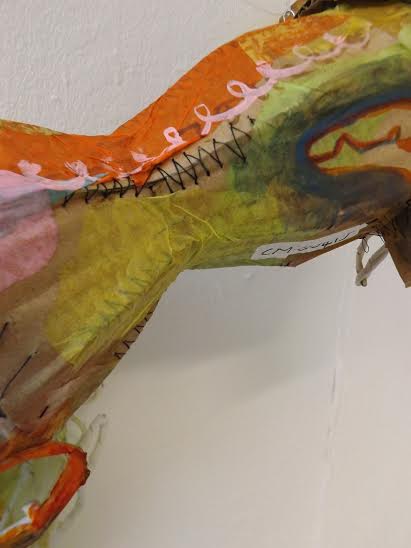 Endnotes
(1) Oh yes, there we go again, it’s always your hands we’re measured against, so that the imagination of every person passing reaches out to cradles us, imagining their thick fingers against our surfaces.
(2) Very witty, don’t you ever get bored of these laboured attempts at humour? Maybe it’s alright if you are just reading it once, but these words are being applied to me, every time anyone looks through this glass they are mouthing these “engaging” descriptions half reading half looking until the actions become absorbed into a single movement.
(3)  “cheap materials” well now isn’t that kind
(4) Somewhat laboured save, but good effort.
(5) At last you admit that that is what you’ve been doing this whole time- guessing.