On Thursday June 7, 1906, the Quebec newspaper Le Soleil published a notice titled “Huron Chef Uniform” on its last page (fig. 1). The publication refers to Caroline Gros-Louis’ moose hair embroidery as a “true” art object. Many questions arise from this distinct choice of words: What challenges did Gros-Louis face as a Huron-Wendat artist practicing in Quebec? How did the socio-cultural context in which she created art influence her craft? When did her work come to be considered as “art” by the white community?

Caroline Gros-Louis was born in Wendake in 1876 and died in her hometown in 1941. [1] The town was known as Jeune-Lorette at the time, a village close to Quebec City that was mainly inhabited by members of the Huron Nation. These members were forcefully converted to Catholicism by Jesuit missionaries in the seventeenth century. [2] As a part of the Huron-Wendat community, [3] Gros-Louis received artistic training from her mother, Marie Robigaud, who was also known as Mrs. Etienne Gros-Louis. [4] The mother-daughter bond can be understood as a representation of the intergenerational aspect of the Wendat art practice. This multi-generational exchange of knowledge through showing and telling reflects the community’s relationship to art as a communal practice. [5]

The connection between artistic production and the community also remains complex. Jeune-Lorette was a tourist destination at the time for white Canadians and Europeans attracted by “curiosity and the desire to learn.” [6] In the nineteenth century, many Indigenous peoples’ economies were dependent on the production of “articles de fantaisie,” [7]specifically snowshoes and moccasins. [8] The late eighteenth century was a difficult economic period for the Wendat people. [9] Nevertheless, the community’s artisan production became a thriving industry in the following century due to the efforts of both Marguerite Vincent La8inonkie and her husband, Paul Picard. [10] Picard directed the men to hunt for material, while Vincent installed a “putting-out system,” wherein she separated the women in the community according to their skill set. [11] This resulted in a system of mass production [12] which was vital for the survival and independence of the community. It gave the Wendat people recognition beyond the region, and allowed them to assert their presence in the Wendake territory. [13]

Caroline Gros-Louis and her mother practiced embroidery within the context of artisanal mass production and intergenerational learning. Gros-Louis’ practice indicates awareness of this complexity. Indigenous art historian Anette de Stecher calls Wendat art production an example of “auto-ethnography.” [14] While using floral designs that reflected a European taste, Wendat artists also chose to represent their community performing daily activities that opposed the romanticized wilderness that Canadian-European visitors expected to see. [15] Caroline Gros-Louis and her contemporaries added their own perspectives to work that would end up in European hands –– this indicates their awareness of that economic exchange.

Embroidery was associated with femininity, and was considered to be a woman’s work by the Canadian-European mentality. [16] Women were restricted to the private sphere, and embroidery was dismissed as a mere activity to pass the time. [17] It is important not to project these notions upon the Wendat culture. Wendat people valued women’s embroidery techniques because these were vital to the community’s survival. Men were also involved in the embroidering process. [18]

For the Canadian-European population, the value of Wendat art was different because they did not see it as a representation of the survival of their own culture. Although the Le Soleil notice refers to Gros-Louis’ embroidery as “art” (fig. 1), she is described as a “child of the tribe.” Caroline Gros-Louis was thirty years old when the newspaper article was published. She had received artistic training. The newspaper’s use of the term “child” undermines her personal identity, and discredits her individual artistic skills by centering the tribe. Moreover, Gros-Louis’ work was displayed in an “Indian curiosity installation” within a luxury department store, [19] whereas white male artists’ work would have been presented in galleries at the time. Each display practice has a different connotation. A cabinet of curiosities in a department store suggests entertainment and commodity, instead of the artistic and cultural importance linked to art galleries. [20]

Caroline Gros-Louis was both Indigenous and a woman in the late nineteenth-century, thus critics considered her as a representative figure for her community, rather than as an individual artist. Gros-Louis’ view of her own artistic practice is something we will never know, especially since Wendat women were expected to remain silent and modest in order to show gratitude for their “gifted” Christian fate. [21]

Today, Caroline Gros-Louis’s work is displayed in history and ethnographic museums. [22] The Canadian Museum of History maintains thirty-three items with Caroline Gros-Louis’ name attached to them. [23] Among the moccasins, pouches and articles of clothing, there is a ceremonial headdress that has received much attention from scholars (fig. 2). A careful examination should, nevertheless, be given to lesser-known works like the Moccasin Vamps (fig. 3). Vamps consist of the top part of moccasins that is embroidered before it is attached to the other sections. [24] Gros-Louis’ embroidery is a floral design made with green and white moose hair. Each vamp has three shamrock plants that are encompassed in an arch. In the nineteenth century, embroidered mementos were popular collectibles for European visitors. [25] Moose hair embroidery became a symbol of Wendat artistry; the community was the main center of the practice. [26] The medium is difficult since it is time-consuming and requires a large amount of instruction. [27] Moose hair embroidery was also valued because of its ability to reflect light, which was a significant cultural facet of the Wendat belief system. It was also an aesthetic symbol of taste for the European buyer because it was distinct from other Indigenous artistic practices. [28] The presence of the shamrock also shows Gros-Louis’ awareness of mass production, and her skilled attempts at appealing to European visitors because the shamrock is associated with Irish and Christian iconography, such as the Holy Trinity. [29]

What set Caroline Gros-Louis apart from other moose hair embroidery contemporaries –– such as Mrs. Prudent Sioui (fig. 4) –– was the community’s decision to make her work a diplomatic gift. [30] This choice brought awareness of her skill to the Western art community. This is why Canadian Institutions remember her. Swedish Consulate Folke Cronholm (mentioned in the 1906 newspaper announcement) was gifted a suit embroidered by Caroline Gros-Louis to celebrate his position as the Wendat Honorary Chief during his visit to Lorette. [31] He even photographed Gros-Louis (fig. 5), and indicated on the back of this photograph that she was the one “who made the embroideries on [his] costume.” [32] The costume was part of the “Indian curiosities” display in Quebec City, and it eventually landed in the Museum of Ethnography in Sweden. [33]

In a period where Indigenous art practices were exoticized and female artists were dismissed, Caroline Gros-Louis was able to leave her mark on the homogenous narrative, while also indicating her own awareness of that narrative within her art. [34] The collections that do carry her work today are, however, mostly ethnographic. Her art also often remains in private collections. This suggests a lingering dismissal of her work as an object of mere curiosity to a white Canadian-European audience –– just as it was back in 1906. 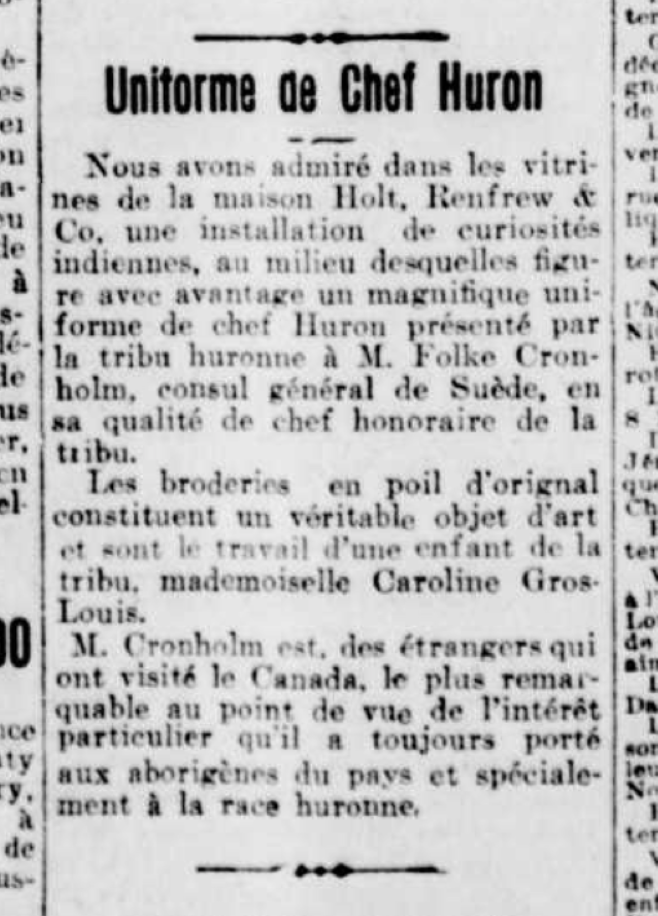 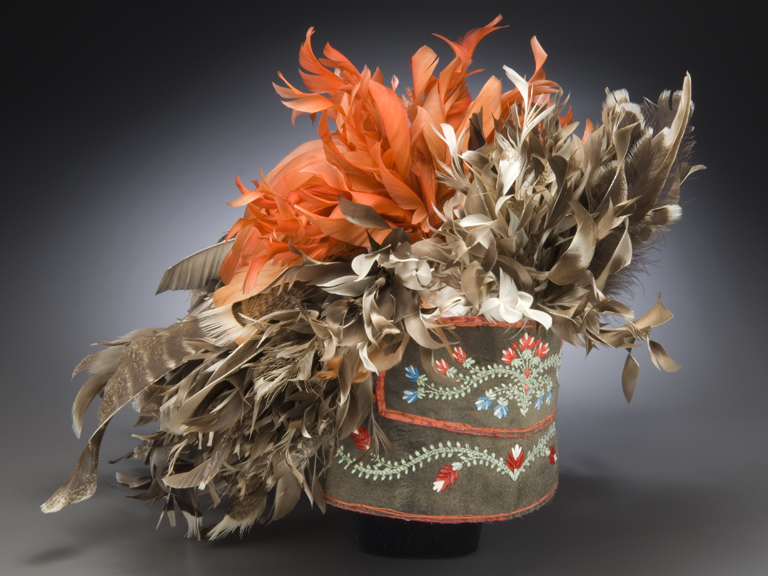 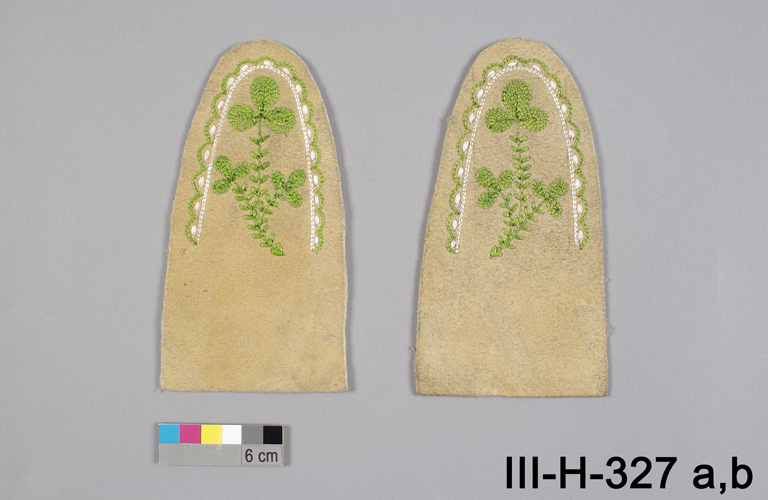 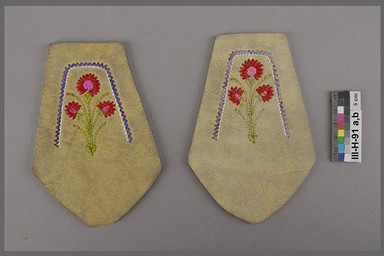 [2] I am reformulating the information provided in the book written by Lindsay. Since his mission was to “save from oblivion some memories of a nation [Wendat] whose end coincides with the end of the century,” the material provides an example of the mentality of the late nineteenth-century. L’Abbé Lionel Saint-George Lindsay, Notre-Dame de la Jeune Lorette (Montreal: La Cie de la Publication de la Revue Canadienne, 1900), 7.

[3] Wendat is the name that the community uses to refer to themselves. Huron was the name given by the French in the seventeenth-century. Contemporary sources will also use the term Huron-Wendat to avoid confusion and acknowledge the colonial implications. Annette de Steecher, “The Art of Community,” RACAR: Canadian Art Review 42, no. 2. (2017): 57.

[7] “Objects of fantasy” implies that these items do not belong in reality. Lindsay, Notre-Dame de la Jeune Lorette, 243.

[10] The Wendat were well-known for their trade and commercial economic capacity, even before the arrival of the French. The art of the community was often used in diplomatic meetings in an exchange of gifts. de Steecher, “The Art of Community,” 58.

[12]  Marguerite Vincent was ahead of her time. The recorded numbers show that in 1879, 30,000 pairs of embroidered shoes were produced by a total of 300 Wendat people. de Steecher, “Huron-Wendat Visual Culture,” 136.

[14] Carolyn Ellis, a well-known autoethnographer defines auto-ethnography as an exploration of the personal in relation to a larger cultural context by privileging emotion and introspection. See Kitrina Douglas and David Carless, “A History of Autoethnographic Inquity” in Handbook of Autoethnography (Walnut Creek, Califronia: Left Coast Press, 2013), 85.

[18]  Men did provide the material, but they were initially embroiderers themselves and participated in the inter-generational learning practice. This quickly changed with the forced integration of European gender ideology. de Steecher, “The Art of Community,” 57.

[22] Her work is also in the Museum of Ethnography in Stockholm, Sweden. This is due to Folke Cronholm (Swedish consulate and honorary Wendat chief) who collected some works and then gifted it to the museum on his return to Sweden. “Caroline Gros-Louis,” Museum of Ethnography, accessed November 17, 2019, http://collections.smvk.se/carlotta-em/web/object/1046315.

[31]Folke Cronholm is not the first Swedish man to have a relationship with the Wendat community. In 1748-1749, Pehr Kalm, a Swedish botanist, came to Lorette during his scientific voyage to document plants. He wrote many observations of the Wendat population’s lifestyle, especially their clothing practices. Further research is needed to understand the impact of the forced cultural exchange between Sweden and the Wendat, as well as the men’s “fascination” with Wendat women and the implications for the eighteenth and nineteenth centuries. Delâge, “La Tradition de Commerce chez les Hurons,” 119.

[34] Hélene Gros-Louis is also a contemporary Wendat artist that works in embroidery. Although, she is stated to come from a long line of great hunters, further research needs to be conducted to understand her association to Caroline Gros-Louis. Esther Bryan, Quilt of Belonging: The Invitation Project, (Erin, Ontario: Boston Mills Press, 2005), 221.

Boutillier, Alicia and Tobi Bruce. The Artist Herself: Self-Portraits by Canadian Historical

Douglas, Kitrina, and David Carless. “A History of Autoethnographic Inquiry.” In Handbook of

Parker, Rozsika. The Subversive Stitch: Embroidery and the Making of Feminine. New York:

Preziosi, Donald, and Claire Farago. Grasping the World: The Idea of the Museum. Aldershot,