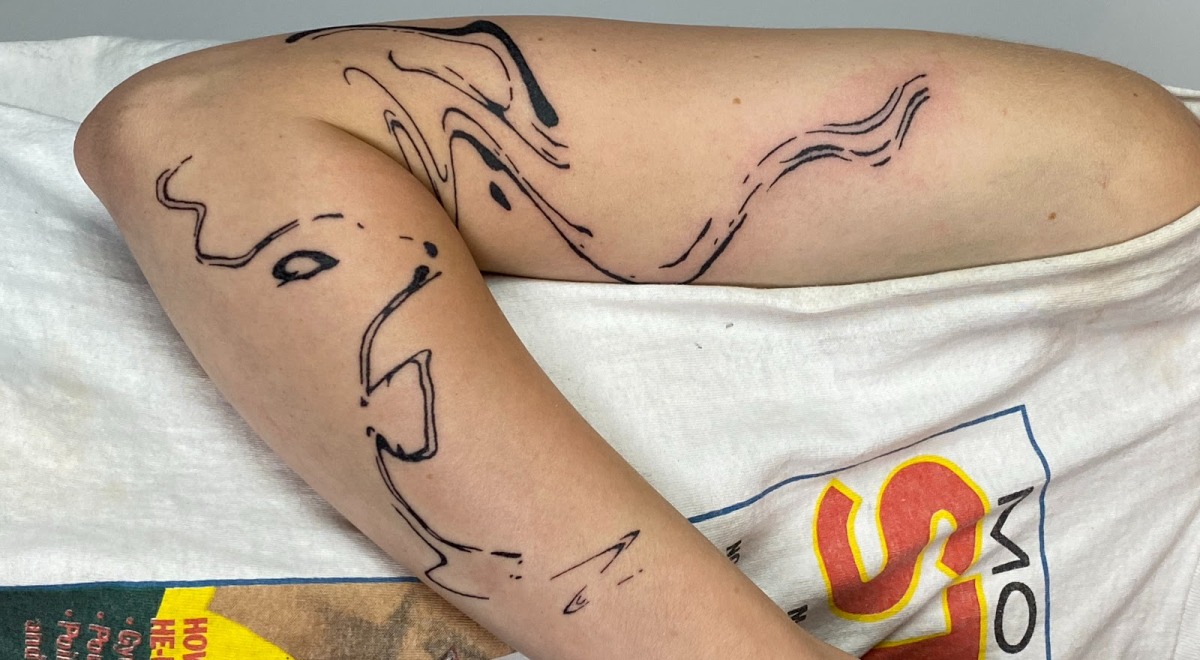 “I lost complete control of the message I was trying to send.” 32-year-old, New York-based tattoo artist Rosa Laura posted a five-minute video on their Instagram page, not knowing it would garner worldwide attention and more than 2 million views.

In our Zoom conversation, Rosa and I fight through lags and pauses so we can talk about their amazing story. Until they were 29, Rosa lived in São Paulo, Brazil. “I identify as a transmasculine, non-binary person,” Rosa tells me, with a cup of tea in their hand. Rosa shares they were connected to their sexuality in highschool. “First, I only connected to my sexuality. I had no reference of what being trans was. I didn’t know it was something I could be. I only understood that I was trans when I was 26. That is when I came out.”

At age 29, Rosa started to travel for tattooing. They were eventually invited to work at Welcome Home in New York, and have been there for over a year. When I asked Rosa about their tattooing style, they said they “only do abstract tattoos, nothing that really resembles reality.” Rosa’s designs are formed through lines and curves that accentuate the body. “When I am tattooing someone, I look at how their body is present and what it is doing — how do I make it flattering for how the body moves or how it is shaped? If you have a curve here, or your shoulder moves a certain way, I want my design to accentuate that.” Rosa’s designs adapt to each body, “because everyone has their own shape.” “I am inspired by my studies in architecture and big art movements in Brazil that are connected to abstract design. I like to use Xerox machines to distort my designs. I love using a mix of media, so I either draw, use the machine, or use my computer.”

Along with working at Welcome Home, Rosa advocates for trans rights in Brazil on their Instagram page. “I think gender can express a vision of the world. If we start to look at the structures by which society is organized – structurally, politically, economically – we can see it is binary,” Rosa tells me. After leaving Brazil, on their travels, Rosa noticed how gender neutral language is used in other parts of the world frequently. Rosa wanted to learn more about how to apply gender neutral phrases to their native language, Portuguese — an inherently gendered language. “Over quarantine, I started researching more about the Portuguese gender neutral language and then used my social media to post videos about it.” Rosa posted a video on their Instagram, sharing the work they had done. “The video was about how we can increase our vocabulary, adding words non-binary people would like you to use to express themselves in Portuguese.” For the first couple of days after, they were really excited and hopeful. Then, Rosa’s mood changed.

“I started getting messages from friends and people I didn’t know telling me the video went viral on Twitter.” Alt-right Brazilian Twitter had become aware of the video and posted a 10-second clip from their five-minute video. “When I first saw it on Twitter, it had 400,000 views. By the end of the same day, it had 2 million views. When I saw the comments, they were very violent and brutal.” Once right-wing Twitter-users had taken Rosa’s face and voice out of context, it was all downhill from there.

“It lost all control — for real. I lost complete control of the message I was trying to send. It was not only people on the internet, but people related to politics who were using my video.” Rosa tells me politicians who were hoping to be elected in Brazil used the video as ammunition for their alt-right campaigns. The parties condemned the video, stating Brazilians need to uphold traditional ways of life. “I got death threats. My loved ones were threatened. It is very scary — my face is everywhere and I am very recognizable.”

If hope could be found anywhere in this situation, it was through community. “Although I got so much hate, on the other hand, the support I got from the community was incredible. I got so many messages of support from non-binary people saying they wanted to use the language.”

Rosa’s love of tattooing is a form of solace for them in times of utter chaos. “Tattoos can do so much to create a welcoming space and a space of healing,” Rosa tells me. “Tattooing connected me to the trans community. It brings me joy to be able to connect with other trans folks. Whenever you lay on the bed to get tattooed, you’re probably gonna talk. It is a very delicate moment. I learn a lot from them.”

Rosa continues to talk about the importance of tattoos to trans folks. “I tattoo mostly trans people and people within the flag (LGBTQ+). Tattoos are very important to trans people to reconnect with their own body, to recreate a relationship with parts of their body. Tattoos have a power to give people a lot of confidence – it’s a way of bringing memories with you and regaining power of your body. Tattoos can reveal who you are and can be helpful in processing trauma.”

With Rosa’s strong community in Brazil, New York, and now all over the world, they know they have people behind them even when they receive hate. Rosa’s tattoo practice is a form of art activism – making designs that shape each person’s individual body is an active practice of rejecting oppressive, binary systems. Their work centres around the LGBTQ+ community, love, and unwavering support of every individual and their body. Rosa leaves our call saying, “I won’t stop working to make us more visible…because I have felt what it is like to be silenced.”

You can find Rosa’s work on their Instagram: https://www.instagram.com/rosalaura_/?hl=en.